Difference between revisions of "Circle in the plane"

From Diffgeom
Jump to: navigation, search

A generalization to higher dimensions is sphere in Euclidean space

be a point and

be a positive real number. The circle with center

is the set of all points in

that have distance exactly 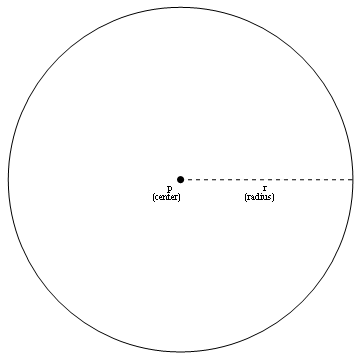 In complex analysis, it is sometimes convenient to view a line as a circle. We think of the center of the line as being a point at infinity, and the radius as infinity. This makes the theory of inversion, the geometric intuition behind complex analysis, as well as coaxial systems of circles, easier to comprehend.

The circle can be viewed as a parametrized curve. In Cartesian coordinates, if the center of the circle is given by

, then the parametrization is:

, though we only need

to vary over an interval of length

In Cartesian coordinates, the equational description of a circle with center

Fill this in later

The plane with respect to the circle

The circle divides its complement in the Euclidean plane into two connected components. One component, called the interior of the circle, and also called an open disc, is the set of points that are at a distance from the center less than the radius. The other component, called the exterior of the circle, is the set of points whose distance from the center is greater than the radius.

The interior of a circle is contractible (in fact, we can contract it to the center by radial shrinking) whereas the exterior is not: it is homotopy-equivalent to the circle.

Some notions that come up when studying single points with respect to a circle include:

Important families of circles that come up: